Author of Functional Medicine: The Origin and Treatment of Chronic Disease 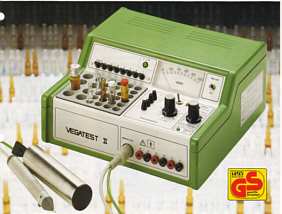 The pioneers of German Diagnostic Electroacupuncture emerged from the field of Dentistry.

Like Dr. Rheinhold Voll nearly 30 years before him, Helmut Schimmel began as a Dentist, but branched out into Acupuncture and Medicine along the way.

In 1979, he developed the Vegatest Method, later renamed the Vegetative Reflex Test.

This system uses glass vials containing samples of different substances and energetic stimuli so that the biocommunication can be done through a single electrodermal test point.

In this test method, silver electrodes are used so that water is not needed to make adequate electrical contact for the test.

A stress response is seen as a decrease in the impedance measurement at the electrodermal test point, typically on the thumb (Electrodermal Lymph Vessel) or the big toe (Liver Meridian).

I was fortunate to have an opportunity to study directly with Dr. Schimmel when he came to a meeting of the Occidental Institute Research Foundation (OIRF) in San Francisco.

After practicing this way for about 7 years, I found that I could quickly and reliably obtain the biocommunication responses through a modified version of Dr. Omura's Bidigital O-Ring Test.

This became my preferred test method, though I continue to use electrodermal measurements when testing in person both as an ongoing method of quality assurance, as well as to extend the clinical findings when possible.

Using the Bioelectronic Functions Diagnosis (BFD) protocol, about 20% of clients will show at least one imbalanced Meridian or Vessel that does not communicate its needs via the body's photoenergetic regulatory system.