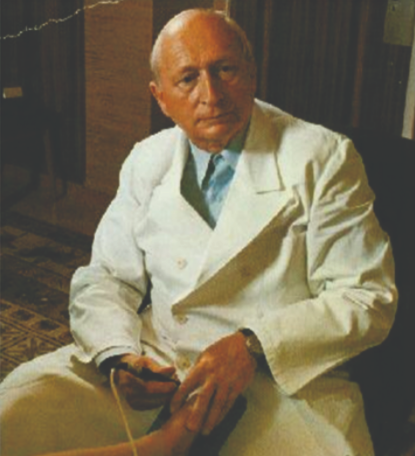 Author of Interrelations of Odontons & Tonsils to Organs, Fields of Disturbance, & Tissue Systems 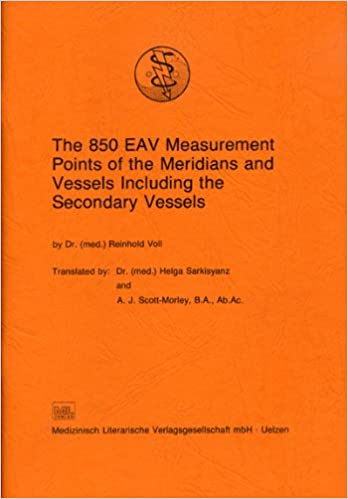 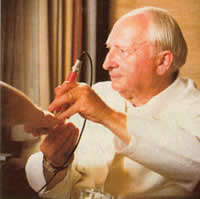 Rheinhold Voll started as a dentist.

He observed the relationship between diseased teeth and seemingly unrelated diseases at remote locations in the body.

When an infected or dead tooth was removed, sometimes a concurrent illness would go into remission.

This drove Voll to study Traditional Chinese Medicine in order to understand the meridian relationships of the different teeth.

He continued his studies in Medicine as well in order to understand the various diseases, as well.

He developed the Voll Meter to measure the impedence of the acupuncture points before and after acupuncture treatment as a means of both diagnosis and quality control of the therapy.

In 1953, he serendipitously discovered what became Medication Testing or Med Testing...

He was training physicians in his EAV technique at a German hospital.

A physician volunteered, and Voll measured a disordered energy reading on his Prostate point (on the Bladder Meridian).

It was time for their lunch break, and Voll instructed the attendees to wait until after the break to do any treatments.

On returning from lunch, the volunteering doctor stopped by the hospital pharmacy and picked up a vial of a homeopathic remedy that had been recommended for him at a previous seminar he attended on homeopathy.

Homeopathic medicine is one of five independent systems of medicine in Germany that is licensed to treat any illness, unlike the monopoly system in the States...

The doctor didn't open the vial... He just put it in his coat pocket, as they had gone across the street for lunch, and it was cold outside at that time of year.

When the break was over, he still had his coat on, and Dr. Voll rechecked the Prostate point measurement prior to starting his acupuncture treatment demonstration.

To his chagrin, the point now measured 50 which is perfectly normal.

He chastised the volunteer for not waiting for the class to implement the acupuncture treatment.

The volunteer said he didn't do any treatment...

As the discussion heated up, and Voll checked the reading multiple times, since he had never seen a measurement change without doing acupuncture.

As he warmed up, the volunteer took his coat off, and then when Voll tested, the original disordered reading was back.

How could that be?

Something was happening to affect the flow of electricity in the Bladder Meridian to the Prostate point on the foot.

Could it be a magic coat?

Putting the coat back on indeed consistently normalized the reading.

That's when the doctor being tested remembered stopping by the pharmacy - though he hadn't broken the seal on the remedy container...

They were then able to confirm that if the homeopathic medicine which was well selected for him and his prostate symptom pattern was within a centimeter of his body, the energy flow responded immediately.

Later testing established that this medication effect was not electrical, but biophotonic, since it would cross a vacuum of 1 centimeter...

That's about the extent of the body's biofield as imaged in Kirlian photography or Gas Discharge Visualization (GDV).

In electrodermal screening and related test methods, we are probing the body's photo-energetic regulatory system...

Dr. Voll eventually mapped out 850 electrodermal points on the skin.

Confirmation of each point required at least three clinical cases with clearly diagnosed lesions in the same remote body location, with corresponding disordered energy readings at the acupuncture point.