At 8 years of age, [Kevin] is in one of my vision training therapy (V.T.) classes. Although he’s been classified as “learning disabled,” his I.Q. was measured as normal last year. Because of my nutritional training and expertise I was suspicious of Kevin’s poor performance in V.T. and in his school work, both of which could be caused by dietary indiscretions.

Diet assessments are completed for virtually all new patients without additional fee and more comprehensive nutrition workups in my office are optional for most patients, but routinely done for V.T. patients——patients for whom a large investment in time and training can be undermined by poor nutrition. The laboratory analysis of Kevin’s food intake revealed that 65 percent of the carbohydrates in his diet are refined carbohydrates. At age 8 he’s already a sugar junky with his “highs” dependent on candy, Twinkies, sugared cereals, and foods which the body converts too rapidly to simple sugars——basically foods which have been stripped of the nutrients required to metabolize the sugars, starches, and fats.

Associated with this daily barrage of sweets and overprocessed foods, I found restriction in Kevin’s ability to think and act his age. [Fortunately, one year after the end of the V.T. And diet enhancement, Kevin was at the top of his class in reading and comprehension skills.] 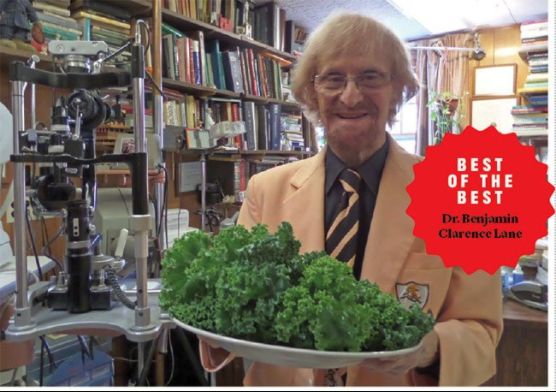 Now eye doctors (optometrists and ophthalmologists) have been reading the results of large, well-done studies published in refereed journals—studies that make it increasingly clear that (a) what are being called “prudent diets” are statistically likely to be preventive of many of the most common eye disorders, and (b) some supplements are additionally helpful as antioxidants, or as heavy-metal chelators, or as cofactors for nutriture interactions, or for restoring mineral balances, or simply as supplemental foods——and as such, many of these specific supplements can be preventive of eye disorders. And we now have substantial data confirming these findings.

The statistics of Emanuel Cheraskin, MD, DMD, of the University of Alabama, demonstrate that persons whose diets are high in processed foods statistically do less well in maintaining physical and mental health. [Our statistics at the Nutritional Optometry Institute reveal that the major performance decrements first become significant when measured body tissue nutrient reserves become depleted below minimum acceptable values, as associated with longterm ingestion of these fractionated foods.

At least 50 percent of our food by weight should be in the raw state——the way our great, great grandparents ate it——including lots of raw fruits and vegetables. Instead, many Americans, especially children and retired persons, eat only processed foods. Processed foods by themselves are only “partial foods” and are insufficient to build or maintain good health. Eating more of partial foods actually is often deficit inducing for needed nutrients.

“Partial” foods lack key trace minerals, vitamins, and enzymes; nutrients which are essential in the control of intraocular pressure, and the prevention of myopia, and more than 100 eye and vision dysfunctions.

Ben actually has many more letters than that, with degrees in philosophy of science, experimental psychology, and human nutrition, as well as a Diplomate in Binocular Vision and Perception.

He is also a Certified Nutrition Specialist.

Ben Lane has long been a kindred spirit for me...

Ben has the courage to think outside the box.

And as a fellow Ivy Leaguer, having graduated from Princeton, he is a great thinker.

Ben was actually my inspiration, along with my father, to consider becoming a Doctor of Optometry.

In 1977, as I was completing my undergraduate studies in the sciences at Dartmouth in 3 years, I felt destined to work in nutritional healing, inspired by my family physician, Schuyler Martin, M.D., for whom I was given my middle name Martin.

But by temperament, I am a healer, not a fighter.

Healing patients as a physician using nutrition looked like taking up a mantle like that of Joan of Arc at that time in 1977.

I looked into Naturopathic Medicine, but set that aside to be taken up later, since I also knew I wanted to spend some time working with my father in New York, and Naturopathy was not licensed there...

Knowing that Ben Lane was doing groundbreaking work in healing the eyes and vision with nutrition, and yet was accepted and respected by his peers among other Doctors of Optometry gave me hope that my father's field could provide cover for me to do the same...

Plus, I knew from being a patient in Vision Therapy at age 8 and then working as a Vision Therapist from age 16 that I could contribute to people's quality of life through Functional, Behavioral, Developmental, Neuro-Rehabilitative Optometry...

While establishing my first research practice in Tokyo, Japan, I was able to visit and observe the nutritional coaching process Dr. Lane's office on one of my visits to the States...

Ben has discovered numerous relationships between nutrition and vision, including:

• the role of Methyl Mercury in nuclear Cataract and subcapsular vacuoles

• the role of excess denatured protein in Wet Macular Degeneration